Talk about your favorite prospects and the happenings of the Canucks AHL affiliate, the Utica Comets.

Baertchi scores on a breakaway early and that is all the Comets got!
Syracuse absolutely annihilated the Comets. 7-1
"evolution"
Top

No scoring till the third when Noah Gadjovich scores his first of two;

No penalty on this take down of Lockwood --- https://streamable.com/tqvfaa

One second after the Comets powerplay expires, Jett Woo (#22) uncorks a bomb from the point that gets tipped at the last second by Jonah Gadjovich (#21). Comets try the goal-line tip twice in a row before they resort to the basics. Gadjovich picks up his thirteenth goal of the year while Woo picks up his first assist of the season.
GOAL - UTICA - 1-0: Gadjovich from Woo --- https://streamable.com/kj7io0

Jonah Gadjovich (#21) turns into one of those pinball bumper thingies, and Carson Focht (#19) bumps a pass off of Gadjovich’s stick and past Martin for the game-winner! I had my doubts about the all-forward trio, but a great quick-up play from Curtis McKenzie leads to a solid victory for the struggling Comets.

GOAL - UTICA - 2-1 Gadjovich from Focht --- https://streamable.com/iz2vhk ..Comets defeat Syracuse 2-1 in Overtime
micky107 is surprised there was no arguing about it being slightly offside. 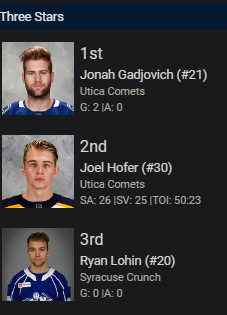 DiPietro looked to harness everything he had learned during his lengthy stay in Vancouver. After months and months of one-on-one time with Ian Clark, DiPietro finally put his practice to good use.
As a quick refresher, DiPietro’s last real game-action came against the Syracuse Crunch back on March 11th, 2020.

GOAL – UTICA – 1-0 COMETS: ---https://streamable.com/r59k1c Dakota Joshua’s effort to move the puck up-ice pays off as he cashes in on a Nolan Stevens (#17) rebound to score in his first game back! An unreal effort from Joshua to make this goal happen.
-------
GOAL – UTICA – 2-1 COMETS: --- https://streamable.com/d0pxdz What a way to answer back from Lukas Jasek (#9)! A mere eleven seconds off the faceoff draw, newcomer Nikita Alexandrov (#41) makes a hold at the Amerks blue line only to get muscled to the ice. Jasek picks up the loose puck and wheels around Alexandrov and his check and slips the puck five-hole past Lekkas.
-------
GOAL – UTICA – 3-1 COMETS: --- https://streamable.com/txt4xi Great pressure from the Comets pays off again, as Lockwood (#10) scores his fourth in as many games utilizing some blistering speed to beat the Amerks defenceman. Gadjovich (#21) with a quick entry off a pass by Wesley (#24) before dishing off to Lockwood, who kicks on the jet fuel to drive around former Comet, Dylan Blujus, for a diving backhander. Gorgeous goal.
------
GOAL – UTICA – 4-1 COMETS: --- https://streamable.com/hir8d8 Nikita Alexandrov with his first pro-goal on North American ice! Jasek (#9) starts the play by digging the puck out of a board battle that Alexandrov is engaged in. Jasek then passes back to Josh Teves (#4), who instantly slaps a shot towards Lekkas that gets tipped by Alexandrov and goes five-hole. Great play from Alexandrov to win the battle and get to the net for his first!
Utica College head coach Gary Heenan pointing out during the break that Cull likely put Gadjovich out with Stevens and Lockwood for the faceoff so that he could fight Pekar.
-------
GOAL – UTICA – 5-1 --- https://streamable.com/thybfm COMETS: Four seconds onto the powerplay, and the Comets add another one to the tally. Woo (#22) corrals a clearing attempt and quickly relays over to Carson Focht (#19), who rifles one that redirects off the leg of Griffin Luce and into Lekkas’ pads. McKenzie (#81) picks up the uncontrolled rebound and quickly puts it over a sprawled Lekkas to continue the rout.
------
GOAL – UTICA – 6-1 COMETS: ---https://streamable.com/flwx3h Gadjovich with his team-leading 15th goal of the year, once again, from the net-front position. Not much to say about this one, tactical puck movement, and Lekkas just proves that he is completely out of his depth. Rewatching the goal, and Lekkas is nowhere near his left post. Lekkas has put up decent numbers at the ECHL level; a 2.13 GAA and a 0.917 save percentage. In five games with Rochester this season, Lekkas has zero wins, a 4.45 goals-against average, and a 0.849 save percentage. Pull him—unacceptable coaching decision from Appert here. 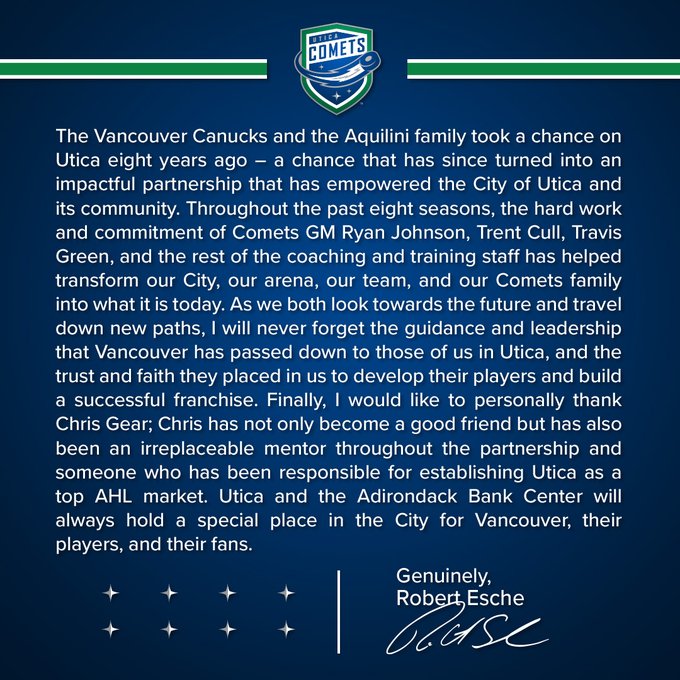 GOAL – UTICA – 1-1 TIE: --- https://streamable.com/dysfse -- Off of the d-zone faceoff, Sam Anas (#7) floats the puck high over neutral territory to a streaking Sven Bärtschi (#47), who slips one five-hold on Spencer Martin to tie things up at one! What a breakaway feed by Anas!

GOAL – UTICA – 2-2 TIE: ---https://streamable.com/t44era -- The Crunch’s Chase Priskie with a brutal blind backhand turnover behind his goal line, directly leading to a gorgeous five-hole goal from Sam Anas (#7). Priskie with a deadly give-away..

GOAL – UTICA – 3-2 COMETS: --- https://streamable.com/mxftjo -- The Comets generate their first lead of the game off of a spectacular forechecking effort from Will Lockwood (#10) that sets up Nikita Alexandrov (#41) for his second goal of the season. Lockwood, as usual, showing off his work rate to steal the puck from Lucas Carlsson and set up Alexandrov for his shot attempts.

GOAL – UTICA – 1-0 COMETS: --- https://streamable.com/lw3l0t -- With two minutes left in the period, Tanner Kaspick (#26) opens the scoring for Utica as he capitalizes on a Lockwood rebound for a wraparound goal. The play begins with an excellent pick-up by Kaspick in the neutral zone as he capitalizes on a missed pass by Boris Katchouk at the Comets blue line. Comets have been solid at 5v5 thus far tonight, and they get rewarded for their efforts with a slick-looking goal.

GOAL – UTICA – 2-1 COMETS: --- https://streamable.com/rad7vb -- The five-forward powerplay pays off as John Stevens (#16) helps out his younger bro with the one-timer feed! The play begins with Sam Anas (#7) fumbling the puck in the high slot. Fortunately, Syracuses’s Boris Katchouk overskates the loose puck, allowing John to steal and then set up Nolan for the goal. How cute.

GOAL – UTICA – 3-2 COMETS: ---https://streamable.com/6vrasm -- “Who needs a powerplay?” Said Josh Wesley (#24) emphatically. Syracuse attempts a rush after the powerplay expires, only for DiPietro to turn them away. Sam Anas (#7) passes off to Wesley for the break-out, and he elects to take it from there by racing end-to-end and pulling a semi-Forsberg-move on Spencer Martin to regain the lead for Utica.

GOAL – UTICA – 4-2 COMETS: --- https://streamable.com/8mk9t4 -- Tyler Tucker earns his first pro-goal with the most casual snipe I think I’ve ever seen. Tucker (#2) picks off an errant pass inside the neutral zone, then casually wheels around three Syracuse defenders before wiring a shot over Spencer Martin’s glove side. Wow. What a snipe.

GOAL – UTICA – 5-4 COMETS: --- https://streamable.com/59wwkn -- Jett Woo (#22) finishes a 42 second OT shift with a defensive move to strip Taylor Raddysh of the puck, race end-to-end, deke out Spencer Martin, and WIN IT in overtime for Utica! Comets snap a two-game losing streak on the backs of three straight goals from defencemen!

Amazing 8 years with the Canucks organization

GOAL – UTICA – 1-0 --https://streamable.com/93dj98 --COMETS: It could only be you! Vinny Arseneau opens the scoring off a slick setup from Shawn Cameron (#15) from behind the net of Michael Houser. Keean Washkurak picks up his first point with a relay along the half-wall to Cameron, who gives a shimmy shake to get around Patrick Polino for the centering one-timer pass to Arseneau (#18). Great shift from the Comets fourth line to generate some momentum for the Comets.

GOAL – UTICA – 2-0 --https://streamable.com/2haaeh --COMETS: Woo! Jett Woo notches his third goal of the season thanks to a bizarre hop off the stick of Michael Houser. Nolan Stevens (#17) starts the sequence by quickly moving the puck out of the Comets’ d-zone onto Woo’s stick as he’s driving down the right-wing. Woo with a slick little stutter step to stagger Amerks defenceman, Griffin Luce.

GOAL – UTICA – 3-0 --https://streamable.com/yl9qpa -- COMETS: John Stevens (#16) capitalizes on the Amerks turnover at the Comets blueline to sink the empty netter. Curtis McKenzie (#81) with tremendous pressure at the blue line to force the mishandle by Rochester’s Oskari Laaksonen.

Trent Cull on last home game in Utica: "I was jacked. I told the guys before the game this is the one I wanted. We don’t have playoffs. I just said I wanted this one and I want your best tonight. I thought they did a great job."
7:23 PM · May 12, 2021·

GOAL – UTICA – 1-0 COMETS:--- https://streamable.com/htubsn --- The Comets finally manage to post up inside the offensive zone for some sustained pressure, and on their third shot of the period, score. Jasek (#9), involved along the endboards, allows Nikita Alexandrov (#41) to fish the puck back to the blue line for Josh Teves (#4), who wrists a puck towards Houser’s blocker side. McKenzie (#81) gets a last-second tip on the puck that redirects the puck to Houser’s glove side, post and in.

Cody Severtson @CodySevertson
I *dont* think the five-forward powerplay is working out the way the Comets coaches hoped it would...

Next Up on the Docket; The Comets return for their season finale this Sunday at 5:05 PM EST/3:05 PM PST.
"evolution"
Top

Late third period;
GOAL – UTICA – 2-1 -AMERICANS:--https://streamable.com/noy2gj -- Sam Anas (#7) weaves through center and scores on the penalty shot to close the gap with 36 seconds remaining in the game. Utica calls a timeout immediately after the goal.