Britain has been an independent and sovereign country all along.
To suggest otherwise is bullshit.

Ten years from now they will apply to join again.
Whatever you do, always give 100 %!
Except when donating blood.
Top

Hey Per maybe you guys can save your country next and Svexit your asses off that sinking ship!
Witchcraft... Oh, but it IS. A dark and terrible magic...
Top

Now that would be progress!

Oh ya and you could sell your arms to conflict nations once again without mama merkel throwing you guys into the ovens
Witchcraft... Oh, but it IS. A dark and terrible magic...
Top

Exciting times we live in 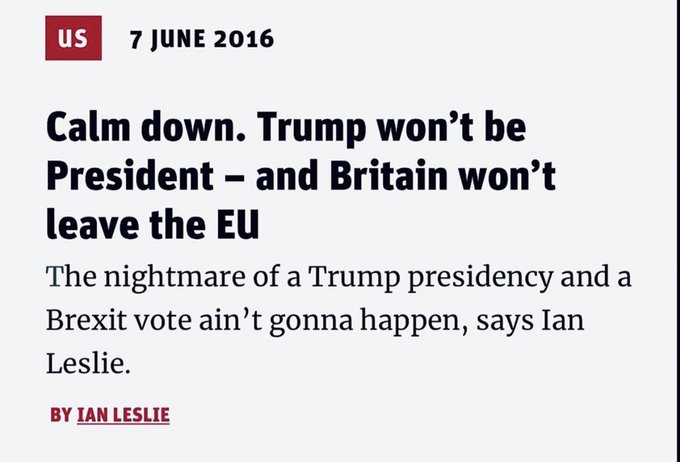 Hey Per maybe you guys can save your country next and Svexit your asses off that sinking ship!

Almost a century after partition carved two separate political entities out of Ireland, Brexit has revived the prospect of unification in a serious way. On Thursday, the British House of Commons passed Prime Minister Boris Johnson’s Brexit withdrawal bill by 330 votes to 231—an outcome even many Protestant unionists don’t want—thereby putting the United Kingdom on course to leave the European Union on Jan. 31. As Irish nationalist politicians find themselves increasingly in the ascendancy in Northern Ireland, this sets the stage for a renewed debate on Irish unity.

The argument for unity is closely tied to the strong economic underpinnings that argue for it in the face of the Brexit threat. Northern Ireland has received more than 600 million pounds ($780 million) a year in funding from the EU aimed at supporting agricultural projects, economic growth, cultural development, and peace initiatives. The open border with the Republic of Ireland in the south facilitates annual exports worth 3.4 billion pounds ($4.4 billion), and some academics have argued that the elimination of economic barriers across Britain and Ireland helped support peace efforts in the 1990s.

The Northern Irish electorate, by and large, seemed to recognize these benefits, and despite the United Kingdom as a whole voting Leave in the June 2016 Brexit referendum, Northern Ireland voted Remain with a 55.8 percent majority.

Those results sparked immediate calls for a border poll—the mechanism by which voters in both Northern Ireland and the Irish Republic can vote through referendum to unify. Then-Northern Ireland deputy leader Martin McGuinness declared in the aftermath of the result that “the British government now has no democratic mandate to represent the views of the North” and “that there is a democratic imperative for a ‘border poll.’”

So, Boris says he wants a deal with the EU like Canada has.

It should be noted that it took seven years to negotiate the free trade deal between Canada and the EU.

There are some 600 treaties that need to be renegotiated between the UK and the EU before November.
It's a pretty tough deadline. If the deals are not in place, the UK crashes out and there will be no more free trade.

The EU has stated that in order to have free access to the common market, the UK must agree to follow EU laws and regulations, submit all conflicts to the jurisdiction of the European Court and continue to allow EU fishing vessels in UK waters.

All of these requirements would beextremely hard for Boris to agree to, without infuriating his Brexiteer Buddies, but the EU has been very clear from the onset - you're either in or out. If you do not want to be a member, you cannot use the country club pool. You can't have your cake and eat it.

To lose or have restraints on 6% of your foreign trade is painful, but it is nowhere near as painful as losing or having restraints on 50% of your trade.
The Brits will have a really hard time getting concessions from the EU.

Also, Trump has made it clear that he will not accept restrictions on farm products in a free trade agreement with the UK. That means they will have to accept chlorinated chicken and hormone laden beef, as well as various GMO products that are banned today and produce that has been produced using pesticides that are illegal in Europe.

If there is any risk of any of that slipping into the EU, it will become really hard for the Britons to renegotiate free trade with the EU regarding food products... The British may find themselves caught between a rock and a hard place.

There is virtually nothing happening till January first 2021 with Brexit, as the UK continue to function under EU until th eend of this year, but by then most treaties must be in place, otherwise Britain is going to be in for a bumpy ride going forward. Or should I say backwards?

Spain has declared that they will not agree to any treaty with the UK that includes Gibraltar. Interesting.

As the Brexiteers conveinently try to omit in every discussion, the EU doesn’t force things down the throat of its members. In pretty much all questions every member state has a veto right. This, if Spain refuses to sign, there will be no trade deal with the UK. Unless, of course, the British first can come to an agreement with Spain on the status of Gibraltar.

The UK position is that Gibraltar is part of the UK.

The Spanish position is that Gibraltar is part of Spain.

The EU position is that we support our members.
Spain is a member. The UK is not.

The Gibraltar poistion is that they are British, but also that 97% voted to remain in the EU, as they realized that as a tiny British community on the Spanish south coast they would be screwed otherwise, which seems to now have come to fruition.

This could get interesting.

So, chances are the UK could end up losing Scotland, Northern Ireland and Gibraltar as a result of Brexit.

Didn't he UK vote for independence back in 2016 or so? I recall Mufti Merkel not being pleased about the result.
el rey del mambo
Top
Post Reply
314 posts