Thomas Drance
Travis Green won’t reveal lineups for tomorrow’s split-squad games. Asked if the #Canucks’ AHL staff will manage the bench in Calgary, Green says the club will “mix it up”.
1:36 PM · Sep 15, 201

The eight-game preseason calendar features two neutral site games, in Victoria at Save-On-Foods Memorial Centre, Monday, Sept. 16 vs the Calgary Flames and in Abbotsford at the Abbotsford Centre on Monday, Sept. 23 vs the Ottawa Senators. Both games continue a tradition started last year, with a preseason game in Kelowna, that brings Canucks games to fans throughout communities in British Columbia.

To be notified when tickets are available for all preseason games, fans can sign up to the ticket information list here. https://canucks.formstack.com/forms/192 ... t_interest 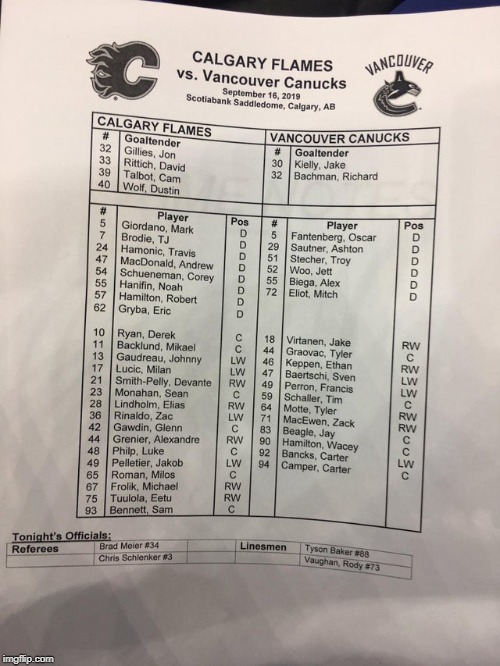 Has a strong Utica feel to that line up
Top

Has a strong Utica feel to that line up

Troy must be happy. He's the mentor.

or not.
"evolution"
Top

Thomas Drance
Lines for the #Canucks @ #Flames side of the split squad:

Hargraves thinks should be shaken to another forum
“ROR IS OVERRATED, MACKINNON IS A BUM, TAVARES IS DONE”
Top

Has a strong Utica feel to that line up

And Calgary is icing almost their entire opening night roster. It'd be funny if the 'Nucks win.

What are you trying to say?
"evolution"
Top

Flames' projected lines and pairings for the game in Victoria:

Notable omission from the Utica travelling line up, Loui Eriksson.
Over the Internet, you can pretend to be anyone or anything.

Where is vancouvers' lineup card for victoria?
Witchcraft... Oh, but it IS. A dark and terrible magic...
Top

Ya I saw that. He's probably going to be continuing his suckage tour at least another year with the big club
Witchcraft... Oh, but it IS. A dark and terrible magic...
Top
Post Reply
319 posts