The Brown Wizard wrote: ↑Thu Sep 10, 2020 4:53 am Maybe they should channel their rage into a far more serious issue than cops killing blacks....blacks murdering other blacks.

Maybe white people should focus on this serious issue instead of telling black people what they should be protesting.

So there isnt an issue?

Of course all homicide is bad and homicide rates in the USA are crazy compared to civilized countries, but addressing the total level of homicides and make a real dent in it would require more restrictive gun laws, and that’s a no go in American politics,

Meanwhile, there is another problem (possibly also in part related to lax gun control) in the USA, namely that their police force is killing a lot more people than the police does in other comparable countries.

US police officers kill roughly 1000 people/year (1099 in 2019) while Canadian police kill somewhere between twenty and two dozen. Now, in all fairness, the US population is ten times the size of the Canadian, so for comparisson we should multiply the Canadian figure by ten, but even when we have done that, US police kill between 300 and 400% more people than the mounties. https://www.freshdaily.ca/news/2020/06/ ... ed-states/

Then consider that the numbers are even lower in Western Europe, Japan and Australia.

On Iceland the police have killed a grand total of one person ever. And that was after that guy had shot and injured two policemen and refused to lay down his gun. They tried tear gas first, but it didn’t stop him.

This is just one of the aspects in which the US seems more lika a banana republic. The public should have trust in the police.
How can you have that when they kill 20 people every week throughout the year? Any given day, US police officers kill three people. I guess sometimes these killings may be justified, but from the footage we get to see they do seem way too triggerhappy. And there are crazy laws in place in several states that makes it more or less impossible to prosecute them. They literally get away with murder.

Now this is low hanging fruit. Reform the police. Train them like police is trained in Europe or Canada.
Hold them accountable when they break the law.

If you could get their kill rates down to the Canadian level it would save 800 lives per year.
If you can get it down to the Scandinavian, German or British level roughly 1000 lives would be saved. Every year.

It’s low hanging fruit. It should have bern implemented a long time ago.

saving money on toilet paper now that I have a brown noser working for me
Over the Internet, you can pretend to be anyone or anything.

I generally don't believe in the "under so-and-so's watch" argument, and if you search your archives you'll find I've never used this argument. You can't just point the finger based on timing; there needs to be a more direct causal link. It's the same sort of argument as linking stock market performance to presidents. It's a bullshit tangent.

All along you've been insinuating (at the very least) that the BLM movement is a reaction to the Trumpman.

And yet your link says it began 3 years prior to Trumpy-poo coming into power.

In the midst of 8 years of a black man being in power, a black lives matters movement began demonstrating.

But hey, if you are finally prepared to admit this problem has nothing to do with Lord Trump, we can move on.

Do you have anything solid here, or are you just choosing what you want to believe. Be honest

Said motherfuckers are encouraging the mayhem by refusing to publicly condemn it.

Your "Cuz Trump" excuses for dat dere are, frankly, retarded.

Strangelove wrote: ↑Tue Sep 08, 2020 5:15 pm The debate was about why "the real BLM" leadership won't come out and condemn said Burning, Looting, Murder.

Oh they can TALK all day about how righteous they are... but their ACTION/INACTION reveal how hideously evil they are.

Sure, in an ideal world, protests would all be peaceful and societal change could be achieved through honest dialogue. But that's not the world we live in, is it?

You heard it straight from the horseman's mouth folks, like his BLM brainwashers, #5 condones Burning, Looting, Murder!

5thhorseman wrote: ↑Thu Sep 10, 2020 10:23 am In any case, I highly doubt anything that the "real BLM" says will change the actions of the fake BLM'ers. Much of the looting and burning is because they're poor, and because of wider racism issues. So anything BLM does would be merely symbolic. So not doing something symbolic makes them evil? Sorry, that's a stretch.

... well they must be right in that decision somehow, someway.

Can you hear yourself bro?

5thhorseman wrote: ↑Thu Sep 10, 2020 12:43 pm
Maybe most blacks are more worried about treatment by police, than they are of being a victim of a violent crime.

Aaaaand maybe ignoring this issue is why its is acceptable to have so many black folk killing other black folk every day.

Who says it's being ignored? Black folk killing black folk is due to a host of problems, including drugs, poverty, gun laws, and history of incarceration. I'm sure there are plenty of other initiatives trying to resolve these issues. It's just not the focus of BLM.


The Brown Wizard wrote: ↑Thu Sep 10, 2020 12:50 pmTo try and present a united front as the victims of this blacks only police brutality allegation doesnt really hold much water when there are so many violent crimes commited within their own communities.

If the objective of BLM was to reduce the overall murder count of blacks in America, then I'd say your right. But that's not what BLM is about. So I really don't get how you're making this connection. Why should BLM have to take on all these other causes in order for their current cause to be considered legitimate?
Top

Satellite imagery shows spread of wildfire smoke across B.C.
The smoke has prompted air-quality advisories in many areas.
B.C. is facing smoky skies the likes of which it hasn’t seen in a couple years.

The smoke, which is coming from wildfires burning in the Western United States, has prompted air-quality advisories in many areas.

Satellite imagery from NASA shows how the smoke is flowing up the Pacific coast and impacting B.C.’s valleys. 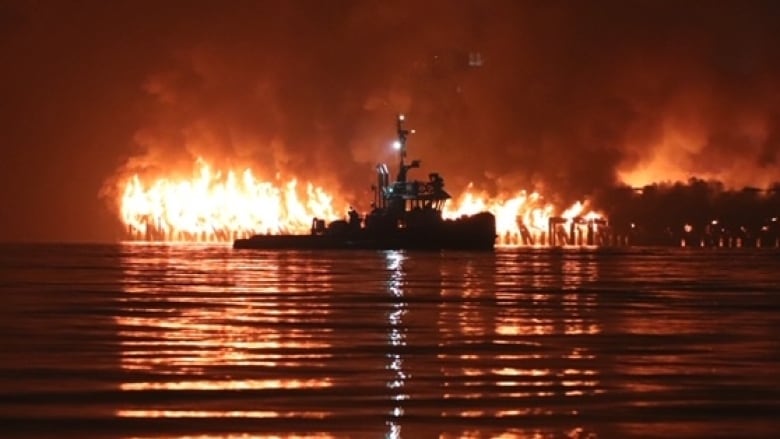 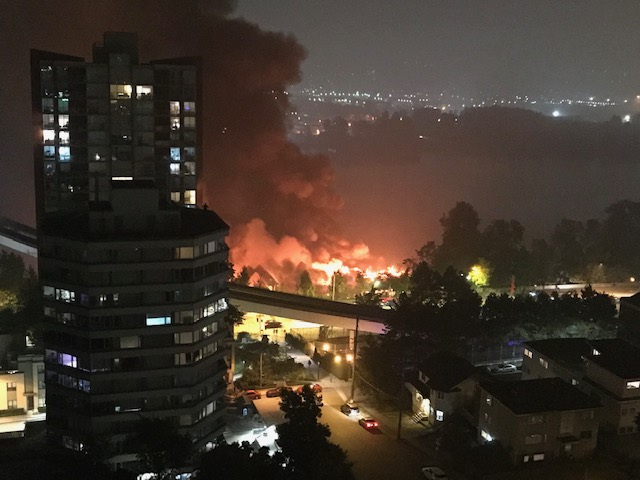 NEW WESTMINSTER, B.C. -- A massive fire that broke out Sunday night has destroyed much of a park along New Westminster's waterfront.

New Westminster Fire and Rescue Services was called to the Westminster Pier Park shortly after 8 p.m. after reports of a brush fire.

“When the crews arrived we had fire underneath the wharf by the New Westminster 'W',” said Chief Tim Armstrong.

"The big challenge is the toxic smoke that is created by the creosote pilings. We've got minimal access to it. Can't put crews on top of the structure and the fire’s actually burning underneath,” Armstrong told CTV News.

Vancouver Fire and Rescue’s fire boat was called in to assist, fighting the flames from the waterside.

Crews from Coquitlam and Delta were also brought in to help.

The fire chief believes the fire will be burning for days.

“We’re going to have to bring in barges and heavy equipment to gain access,” Armstrong told CTV News.

No one was hurt and none of the surrounding businesses are at risk.

Officials are asking people to stay away from the downtown area.

“Close your windows. We already had a smoke advisory before this happened with the wildfires and smoke coming from Washington state. This smoke is highly toxic, so you don’t want to be breathing it in,” said Armstrong.

Is social media the devil?

(don't turn to social media for the answer to that question)
____
GO CANUCKS GO!!!
Top

Completely random, but this is the thread for that, right?

Hey, Wiz! You may enjoy this.

Prophetic. He speaks for us all
Witchcraft... Oh, but it IS. A dark and terrible magic...
Top

So I guess we are allowing Calcutta to take shape in Strathcona Park. Feel bad for the property tax paying homeowners and business owners in and around Strathcona Park who were there long before the homeless Mardi Gras roamed in and took over.

The entire downtown might as well be called the DTES. It’s a cottage industry. Protect it!!!
DOYLE WOULD’VE RATHER HAD KEVIN HAYES AT 7 YEARS 7 MILLION PER INSTEAD OF J.T. MILLER FOR A LATE 1ST RD PICK
Top

Chef Boi RD wrote: ↑Tue Sep 15, 2020 7:21 am So I guess we are allowing Calcutta to take shape in Strathcona Park. Feel bad for the property tax paying homeowners and business owners in and around Strathcona Park who were there long before the homeless Mardi Gras roamed in and took over.

The entire downtown might as well be called the DTES. It’s a cottage industry. Protect it!!! 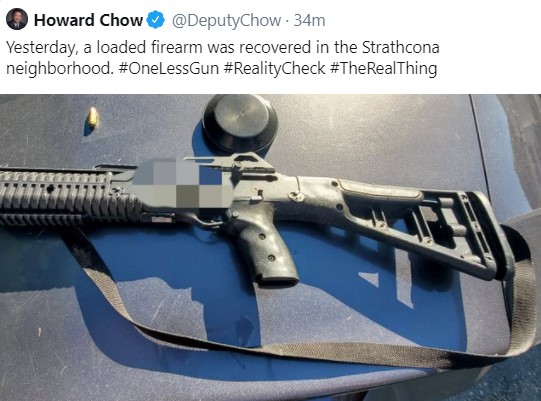 500 bucks at cabelas SKYO. Theyre junk btw
Witchcraft... Oh, but it IS. A dark and terrible magic...
Top

I guess the canadian version - can only hold 5 rounds, but the american version 9mm.

All pistol cal carbines now have a 5 round max in canada and we can buy them in 9mm as well. Criminals will remove the preventer pins anyway.

The issue in canada isnt legal gun owners or their legally purchased arms its the police and courts inability to have any effect on actual gun crime.
Witchcraft... Oh, but it IS. A dark and terrible magic...
Top
Post Reply
3220 posts