Where do you find these things?

So, to refresh your memory, Russians (who else) hacked a server at East Anglia University, and then released thousands of emails from climate scientists that were used in a smear campaign by climate change deniers ahead of a conference in Copenhagen.

Quotes were taken out of context and misinterpreted on purpose to make it look like the scientists were faking their figures, which they of course weren’t.

You can read all about it below,but this quote sums up the zest of it:

Eight committees investigated the allegations and published reports, finding no evidence of fraud or scientific misconduct. The scientific consensus that global warming is occurring as a result of human activity remained unchanged throughout the investigations.

by The Brown Wizard
Its always the other guys fault with You People....or the Russians

Well, the Russians have invested heavily in troll factories, using social media for psychological warfare.
Their main objective (it is believed) is to foment division in the West, so wherever there is a hot topic they create memes etc supporting both sides. They do a lot of the heavy lifting both for black lives matter, all lives matter and police lives matter, just as an example. And they have been very successful.

by The Brown Wizard
*allegedly

by Per
Pretty hot down under. 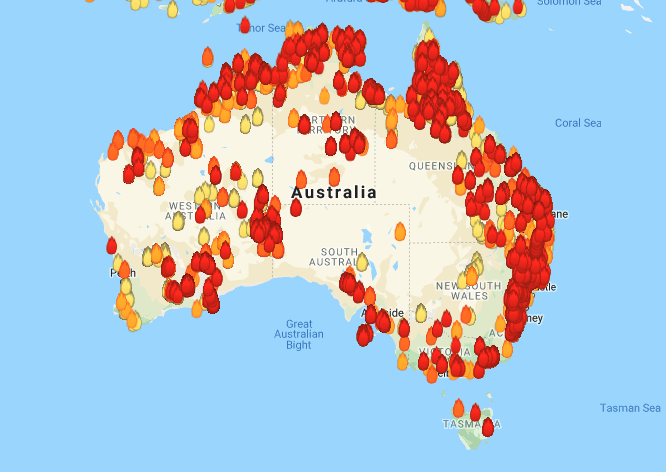 Hundreds of bushfires are raging across Australia, with hotspots in every state.

And a fire tracker map maintained by researchers in Western Australia, shows that they are also threatening areas around every major city in the country.

On Friday night, an emergency warning was in place for a fire near Mount Mercer outside Melbourne and authorities warned residents of Cainbable, about 60 miles south of Brisbane, to take precautions against a bushfire burning there.

And it’s only going to get worse in the coming days as hot, windy conditions are expected in parts of the country on Saturday, according to the Bureau of Meteorology.

“When you have very hot, dry, windy conditions, if all of those things come together, a fire can get quickly out of control,” Lesley Hughes, with the environmental group Climate Council of Australia, tells TIME.

“As the climate is warming up, we’re getting more and more extreme hot days and currently, of course, Australia is in the grip of probably unprecedented heatwave conditions almost right across the continent.”


Mainland Australia is bracing for a heatwave so intense it could rewrite the history books, but it is not just the land that is sweltering.

The warm waters are believed to have contributed to a number of fish kills in the past month.

"Particularly in the last two weeks or so the ocean temperatures have been increasing — they're about two degrees warmer than what is normal for December," University of Western Australia coastal oceanography Professor Charitha Pattiaratchi said.

by Per
More from Australia:


Bulls cannot breed at Inverell. They are becoming infertile from their testicles overheating. Mares are not falling pregnant, and through the heat, piglets and calves are aborting.

My work as a veterinarian has changed so much. While I would normally test bulls for fertility, or herds of cattle for pregnancy, I no longer do, because the livestock has been sold. A client’s stud stock in Inverell has reduced from 2000 breeders to zero.

“Climate change over the next 20 years could result in a global catastrophe costing millions of lives in wars and natural disasters,” reported left-wing newspaper the Guardian on February 22, 2004.

“A secret report, suppressed by US defence chiefs and obtained by The Observer, warns that major European cities will be sunk beneath rising seas as Britain is plunged into a ‘Siberian’ climate by 2020. Nuclear conflict, mega-droughts, famine and widespread rioting will erupt across the world,” the report added.

The alarmist document went on to claim that nations would resort to using nuclear weapons to protect dwindling food supplies, a situation that would “bring the planet to the edge of anarchy.”

The authors of the report, Peter Schwartz and Doug Randall, also asserted that “By 2020 ‘catastrophic’ shortages of water and energy supply will become increasingly harder to overcome, plunging the planet into war,” causing widespread “crop failure” and “famine.”

So apparently, the UK is just 5 days away from being plunged into a “Siberian climate” and millions of people are about to die in a giant nuclear carnage caused by global food shortages and monster droughts.

Or alternatively, so-called “climate experts” have been proven spectacularly wrong on absolutely everything, from Paul Ehrlich’s prediction of millions of deaths from famine by the 80’s, to Al Gore’s absurd claim that the Arctic would have “ice free” summers by 2013.

Just like the much heralded “secret report” that predicted global catastrophe by 2020, none of it happened.

Say, doesn't Per often link to The Guardian?

by Per
The real war on Christmas is fought by the oil and coal companies.

In 1990, coal alone accounted for 75 per cent of all generation. That figure fell to 30 per cent in 2009 and now stands at only 2.1 per cent following a tsunami of power plant closures and nationwide boom in wind and solar.

"As we enter a new decade, this truly is a historic moment and an opportunity to reflect on how much has been achieved," said John Pettigrew, the chief executive officer of the agency in charge of the UK's energy network, National Grid.

Just a handful of coal-fired power stations remain operational and all will be shuttered by 2025 under a plan legislated by former Tory prime minister Theresa May and embraced by her successor Boris Johnson.

Dave Jones, an analyst at Sandbag, said 2019 may have been the "beginning of the end" for coal in Europe.

"Now that carbon pricing is finally working ... the economics have already shifted not only from coal to gas generation, but also from coal to clean generation," he said.

"Every country could achieve a 2030 coal phaseout, if they put their mind to it."

"How remarkable is it that in the UK, the home of Edmund Burke, Thatcher and Churchill, there is consensus on the reality of global warming and the need to act," [Former Australian prime minister Malcolm Turnbull] tweeted.

"A reminder that there is nothing 'conservative' about climate denialism."

The UK's Conservative government has pledged to make the country carbon neutral by 2050.

Meanwhile Australia, where their beds are burning, is still mainly relying on coal, which is ludicrous when you consider how easily they could switch to solar, which is both cheaper and climate neutral. I mean, most of the country is desert. How can you beat that for reliability when it comes to solar?

by Per
... and speaking of Australia:


Summer in Australia use to be something we yearned for: long, lazy days spent by the beach or pool, backyard barbecues, and games of cricket with family and friends. But recent summers have become a time of fear: Schools and workplaces are closed because of catastrophic fire danger, while we shelter in air-conditioned spaces to avoid dangerous heat waves and hazardous levels of smoke in the air. Campgrounds have been closed for the summer, and entire towns have been urged to evacuate ahead of “Code Red” fire weather. Welcome to our new climate.

Of course, unusually hot summers have happened in the past; so have bad bushfire seasons. But the link between the current extremes and anthropogenic climate change is scientifically undisputable.

The fires raging across the southern half of the Australian continent this year have so far burned through more than 5 million hectares. To put that in context, the catastrophic 2018 fire season in California saw nearly 740,000 hectares burned. The Australian fire season began this year in late August (before the end of our winter). Fires have so far claimed nine lives, including two firefighters, and destroyed around 1,000 homes. It is too early to tell what the toll on our wildlife has been, but early estimates suggest that around 500 million animals have died so far, including 30 percent of the koala population in their main habitat. And this is all before we have even reached January and February, when the fire season typically peaks in Australia.

Yes, you can dispute it for political or commercial reasons, but scientifically it's undisputable!

I mean, seriously; Scientific American or Faux News. Who do you believe?

by Per
10% of Sweden's CO2 emissions come from our steel production.

To make steel, you have to rid the iron ore of oxygen. Traditionally this is made by using coking coal in the process. Apart from melting the ore, the carbon in the coking coal combines with iron oxide to create carbon dioxide and thus ridding the iron of impurities.

Now they're attempting to replace the coal and instead use hydrogen. Burning hydrogen can create just as high temperatures as burning coal, and the hydrogen binds oxygen as well, creating water in the process. They have been attempting this in a smaller scale since 2016, and the results are good. at present the cost is slightly higher than the traditional way, but getting up to scale and gradual improvements will probably lower the cost, while the tax on carbon emissions is likely to increase over time and consumers given the choice between dirty and clean steel are likely to be willing to pay more for a certified non-carbon product.


The steel industry is one of the highest CO2-emitting industries, accounting for 7 percent of CO2 emissions globally. A growing global population and an expanding urbanization are expected to trigger arise in global steel demand by 2050. The carbon footprint in the steel industry is thus a challenge for Europe and the rest of the world. Therefore, in 2016, SSAB (global leader in high-strength steels), LKAB (Europe’s largest iron ore producer) and Vattenfall (one of Europe’s largest electricity producers) created HYBRIT. HYBRIT aims to replace coking coal, traditionally needed for ore-based steel making, with fossil free energy hydrogen. The result will be the world’s first fossil-free steel-making technology, with virtually no carbon footprint. Instead of CO2 emissions the by-product will be water.

Yes, you can dispute it for political or commercial reasons, but scientifically it's undisputable!


the link between the current extremes and climate change is scientifically undisputable.

There now it's true.