How about a thread for trivia - I'll start with this item I found while watching the game on one half of my monitor while I surfed on the other half.

That's a pretty interesting post Cornuck. I wish I had something to say that could remotely match it.

The only thing I might say is that the mention of #66 here might have something to say about the reputation of Mr. #99
Top

Might be time to fire up this thread for a while...

Here's a team that I hadn't heard about (or had long forgetten) - The Denver Spurs of the WHA.

The Spurs' first exhibition game, against Howe's Houston Aeros, proved to be a microcosm of their brief stay in the WHA. No beer was available because Mullenix was unable to get a liquor license, there was no flag to face during the national anthem, and the scoreboards didn't work. Only 5,000 fans showed up. The situation didn't get much better during the regular season; they only averaged 3,000 fans in a 16,800-seat arena. The most widely cited reason for the poor attendance was hard feelings over being spurned by the NHL. Denver-area fans had been banking on an NHL team after three years of advertising and did not consider the WHA to be a major league.

Rumors had abounded even before the Spurs got on the ice that the NHL was planning to move either the Seals or the Kansas City Scouts to Denver. By late December, Mullenix got word that the Scouts were in very serious discussions about moving to Denver for the following season. Knowing he couldn't hope to compete with an NHL team, Mullenix began the process of selling the team to the "Founders Club," a group of businessmen based in Ottawa, on New Year's Eve. He had initially begun negotiations with the Founders Club a month into the season when the first rumors cropped up of a Scouts move to Denver. Soon after Mullenix reopened the Ottawa feelers, the Founders Club insisted that Mullenix move the team to Ottawa immediately. In the middle of a road trip, Mullenix quietly moved the Spurs to Ottawa on January 2, 1976, where they were renamed the Ottawa Civics. The players reportedly only learned of the move to Ottawa when they stood on the ice in Cincinnati (in their Denver colors) and suddenly heard O Canada being played in honor of it being the national anthem of the nation of their new "home city".

And for an added Canucks angle: The last active Spurs player in the NHL was Ron Delorme
2019-20 - Playoff Bound
Top

Surely not every move...
Witchcraft... Oh, but it IS. A dark and terrible magic...
Top

The Denver Spurs were a WHL franchise before that. I remember them playing the Canucks in the late sixties. Can't remember if they were any good, the Portland Buckaroos were our main rivals then.
el rey del mambo
Top

Before there was Craig Mactavish, there was Andy Brown. Playing 62 games for the Red wings and Penguins, brown was the last goalie to play without a ,mask in the NHL. His last NHL game was April 7 1974, a losing effort against the Atlanta Flames.

Brown then signed on with the WHA Indianapolis Racers where he went on to play 86 games over the next three seasons before retiring after the 1976-77 season after suffering a back injury. Had he played for two more years he would have suited up with Wayne Gretzky for Indianapolis, which would have meant Gretzky had bridged the careers of the maskless Brown and the unhelmeted MacTavish. Andy Brown's final pro game was November 10 1976, 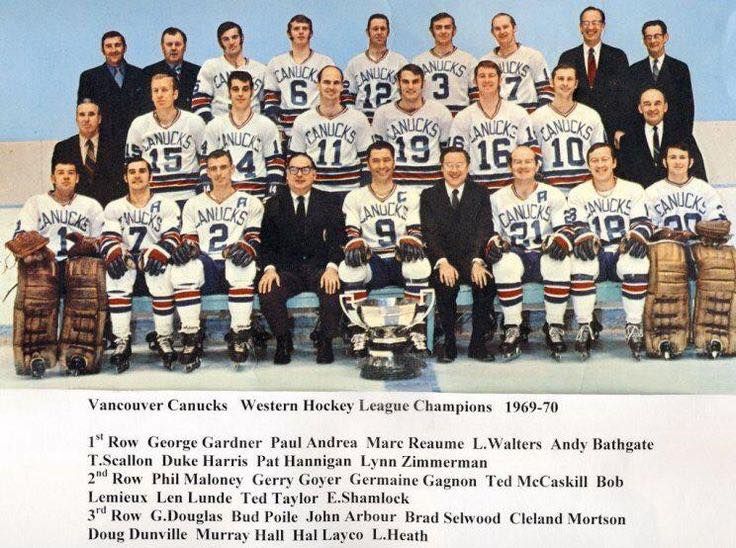 Nine years old. My parents took me to this last game. A bit before that, one of my friend's Dad took him and me to a game and that
Pat Hannigan, ( Irish decent

), beat the living shit out of a Portland dude, a fight that lasted at least 4 minutes. Apparently, they fought
often. His name was Connie Madigan. Might well have been Irish too mm?

is it too early to open the whiskey?
"evolution"
Top

I was at that game too Mick, though you remember it better than me. I really just remember the trophy presentation and the big celebration. Phil Maloney and trainer Eddie Shamrock would have been Irish as well.
el rey del mambo
Top

Megaterio Llamas wrote: ↑Thu May 21, 2020 1:05 am I was at that game too Mick, though you remember it better than me. I really just remember the trophy presentation and the big celebration. Phil Maloney and trainer Eddie Shamrock would have been Irish as well.

You know what Mega, here we are, chatting about games that were seven freakin years before "Slapshot" made it's premiere.
I'm 59! I don't feel that old. Well sometimes. Doyle shouldn't worry so much about 50. It only gets better. Shame is no longer an option.

Hargraves doesn’t mind being 50 because he looks like he’s 40.

Doc says he's still got his Daytons. So do I

Get your pick-up yet? When the shit hit the fan and the hockey season ended, I think about two days later Dodge Ram came out with

All the car companies offering 60 / 90 / 120 days with out payments cause they're here for us. They did that anyways.

Finding a good used one should be easy now.
"evolution"
Top

I’m waiting a bit yet. Gonna keep driving the F150 for a couple months yet. A buddy may be cutting loose his Chev this summer. It’s 2014 but it’s 3/4 ton. I know he has treated it well though.
“Gohmert and Bumpty sitting in a tree”
Top
Post Reply
19 posts