Let's stop alluding to past failures
Hockey is Life, Nothing Else Matters
Top

...and almost against the Rangers as I referenced earlier. We're no strangers to down 3-1 and getting 'er done.


Not to mention VGK blew a 3-1 series lead just last year, and much like this series they had pretty decisive victories in Games 3 and 4 to go up 3-1 only to have the Sharks climb back. Hope the memory haunts them.
Last edited by Nuckertuzzi on Fri Sep 04, 2020 12:42 am, edited 1 time in total.
Top

Let's stop alluding to past failures

What?! If you hadn't noticed, this franchise is chock full of failures. By those standards, we have nothing to celebrate.

C'mon man, that series was a great comeback

Dude, don't mention the war... you want to get banned by Corn?
Try to focus on THIS year... again
Top 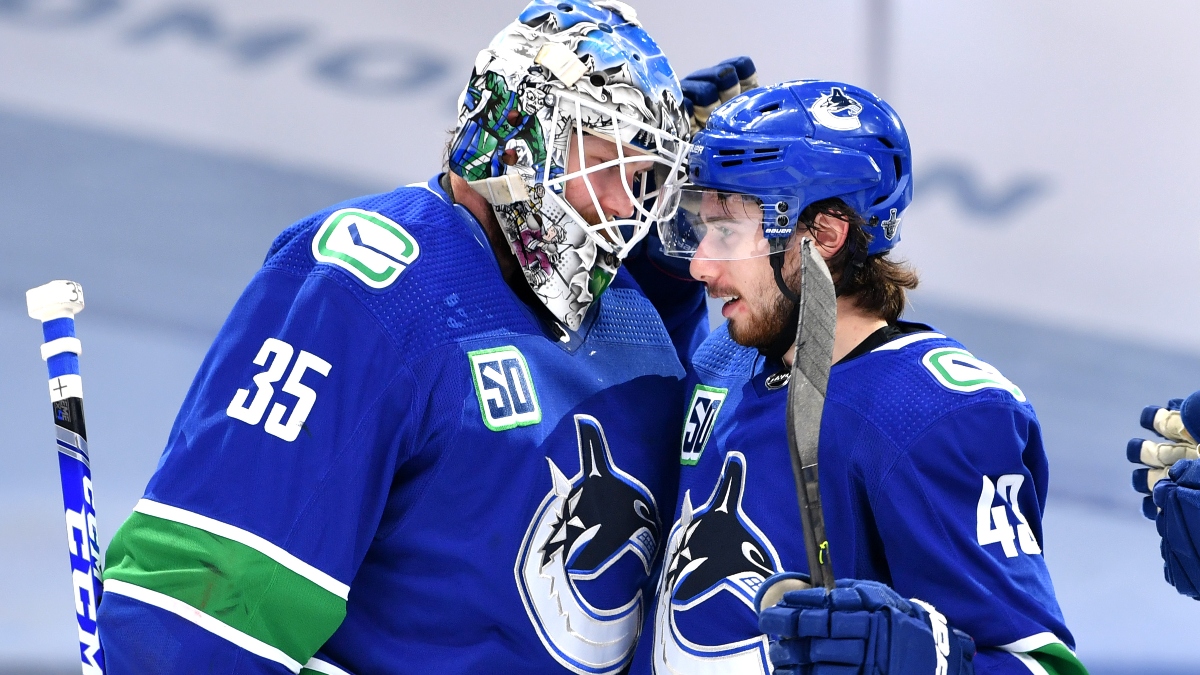 It's not all 'bout Demko, it's the whole team around him playing with the heart of Mottsters.
"Every dog has its day." - CC Hockey Pool Champion 2004 & 2013 'Moves like Lenarduzzi'
Top

Hockey Widow wrote: ↑Thu Sep 03, 2020 11:39 pm Ya back to back for game 7 sucks but it won't be just us that is tired. I thought we played a good game tonight. Yes we were badly out shot and yes Demko stood tall. But defensively we listed second chances and kept them to the outside. They are getting frustrated. We have taken their BS and held our own.

Everyone wants to talk about how Markstrom and now Demko are stealing games. But yet we are scoring goals. Goalies don't do that. The team has not wasted great goaltending. Thats key. How many years has goaltending let us down when we have had great teams? It is nice that both guys are playing great. But the team in front of them has to score for us to win so let's credit our goal production. Our best players are being our best players.

I'm wondering if Green & Co. have finally learned to make game to game adjustments.....it's looking like it.

We are letting Vegas wear themselves out on their own strengths. Watching last night I paid attention to what some of the analysts said about the scoring chances and the lack of actual grade A chances for Vegas. They actually don't have anyone who can pass the puck like Petey, Hughes, or even Boeser and Miller. The Knights' strength is their team attack, dog-on-raw-meat puck pursuit, and neutral zone hustle.....which generally means a good chance of winning. The Canucks counterattack has been to choke the slot, cover the middle point, and allow Vegas to have the ice to the outside of the faceoff dots, while focusing largely on letting Demko see the first shot and clearing the second shot opportunities.

I don't think I was imagining it when I said I saw a slower Knights team in the 3rd period. Every mistake seemed to go back to the Vegas end with speed that they couldn't quite match.

For your Game 7 keys we need to

1. Fix our PP zone entry. Read when and when not to drop pass. Vegas was waiting for it by the 2nd period. Once setup we actually move the puck quickly and get Vegas scrambling.

2. We can only try and control our sticks and defensive zone clears. Last night was a debacle of officiating bias.

3. The forecheck doesn't work as well against Vegas because they have a strong transition game and we need our energy to play the defensive system that counters them.

4. Scoring first is a must against Vegas. We can't chase them.
Top

It's not all 'bout Demko, it's the whole team around him playing with the heart of Mottsters.

well, since I am superstitious, I am starting drinking again in 10 minutes

The 'Chain of Command' is the chain I am going to beat you with until you understand I am in charge.
Top