Feels so very good to be wrong. I thought the Wild was going to take it. Not sure, but the deep seated satisfaction associated with tonight's win, is as good as.... ..yeah, it's 'that' good!
cc oldtimer
Top

Incidentally, the most popular prediction around the hockey world was Vancouver in four... 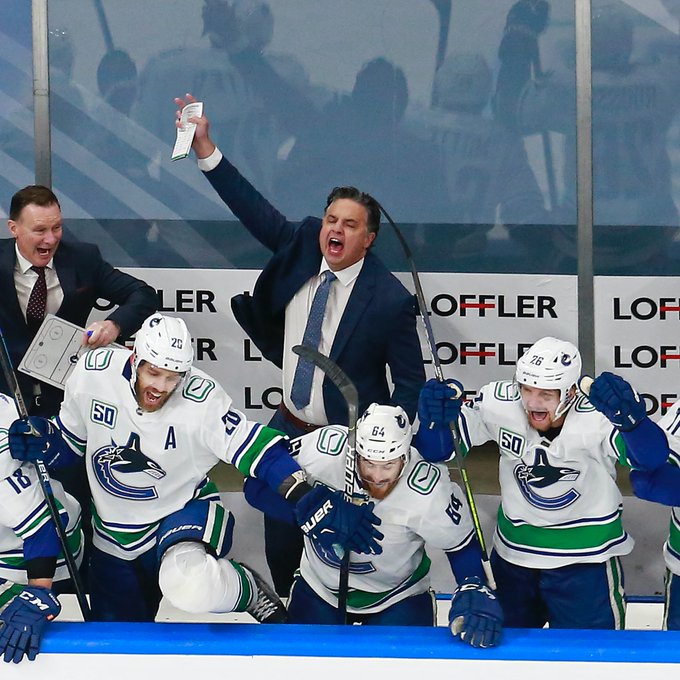 If he doesn’t win Calder, maybe he can get Conn Smythe?

Green should of pulled him for 2 shifts. He has sucked balls big time

Yep... no excuse
Whatever you do, always give 100 %!
Except when donating blood.
Top

I drank at my neighbours, quick walk home.
Top

Was there a game tonight?


16
The only HW the Canucks need
Top

Fucking Benning. We have no first round pick this year!
The only HW the Canucks need
Top

This was similar to us and rats tonight.....
Top

No better year then get a cup.
Top

“A lot went through my mind. Pearson made a heck of a pass. Stalock had my number the whole series so it was nice to see it finally go in.” - Horvat on the tying goal...
-----------------
“Marky doesn't give himself enough credit. He's been a brick wall all season and we wouldn't be where we are right now without him. I couldn't be more proud of our guys. Our young guys stepping up in their first series. From goaltending all the way up we found a way to win.” - Horvat
-----------------
“He's been great for us. He's been there and won before, he stepped up again tonight. He won faceoffs and killed penalties all night, same with Beagle. They were great.“ - Horvat on Sutter’s game

“We're happy to finish this in 4 instead of going to 5 with Minnesota having some momentum. We've got a long ways to go still, we'll enjoy this win but then it's time to go back to work.” - Markstrom

“I think it's nice that he scored. He doesn't get a lot of credit for that part of his game. He's been in Vancouver for some tough times and he's a big part of where we want to go.“ - Green on Tanev’s goal
----------------
“He had a good camp so he was our best option. He played heavier than we thought and made good passes. I'm happy for him, he's been through a lot. His first game ending like this is extra special for him.“ - Green on Juolevi
----------------
“This is a group that learns quickly. Coaching this group is enjoyable, they listen, they buy in as a group - that's what you want from a team. Right before OT we talked about our game and what we do well - that's exactly how we scored.“ - Green
----------------
“He's had such a good season, he didn't have his best night. We laughed about it after the game. I actually told him post-game it's about time the team put him on their back.” - Green on Markstrom
----------------
“I'm happy for him. He's always been a guy that always does what's best for the team. He had a hell of a series. I thought tonight was by far his best game, we shortened the bench when we were down and he played a lot. He had a great all around game.” - Green on Sutter

“I don't think you can put a price on it. he does a lot of things in the d-zone that I can't do. Chris is the heart and soul of the team, it's nice to see him get the goal. He's helped me a lot both on and off the ice.“ - Hughes on Tanev's impact in his development
-----------------
“I think it means everything. I take a lot of pride in that. I think we got a really solid d-core and a lot of guys who can play those minutes. I think I played a bit more because we were trailing.“ - Hughes on what more ice time means to him

Thats an interesting stat on Bo. Talk about the captain stepping up and being clutch in a series clinching game. And what can you say Hughes that hasn't already been said. Too bad I missed the game.
The only HW the Canucks need
Top

Even though it’s nerve racking for a fan, I like the way they won this game.
Being behind, 1-0, 3-1 and 4-3 and each time coming back to tie the score and then win in overtime - this builds

They will remember this in futire games when they fall behind.

It’s not over till the fat lady sings.

The pick will end up being 16th 17th overall. Whoever they end up picking there will be no match for JT Miller. Might even never play a game in the NHL, not unheard of when you look at the historical percentages of NHL draft picks panning out. The Miller trade could virtually go down as one of the top 5 trades in Canuck history.

Speaking of trades how good were the:

Motte for Vanek
Pearson for Gudbranson

Mustn’t forget about Leivo for Carcone
DOYLE WOULD’VE RATHER HAD KEVIN HAYES AT 7 YEARS 7 MILLION PER INSTEAD OF J.T. MILLER FOR A LATE 1ST RD PICK
Top
Post Reply
239 posts