One and out yet again and I don't even care it's going to come at the hands of the Bruins.
Top

Gaudy it feels good to beat the Leaves. I been hating Toronto since 1967 !
" If you cant beat them in the alley - you can't beat them on the ice
Top

You park the tank to burn the Leaves and douse the Flames. No exceptions.

Last game of the year. You’re playing the Flames. A loss guarantees you 1OA. A win, you drop to 5OA. Want to win or lose?

Easy. You never want to lose to the Flames. Period.
Whatever you do, always give 100 %!
Except when donating blood.
Top

The Leaves were undefeated when going into the third with the lead, this season. 32-0-0

Can’t stand those asshole Leaf fans in our house. Hope they all paid $1500 a seat and left depressed.
Top

Can’t stand those asshole Leaf fans in our house. Hope they all paid $1500 a seat and left depressed.

Catch BB in one of the intermissions. He said something along the lines that when the leaves were in town they had more fights, arrests, assaults and drunken disorderly than any other team. Said the leaves fans were the worst and most disruptive.
The only HW the Canucks need
Top

Can’t stand those asshole Leaf fans in our house. Hope they all paid $1500 a seat and left depressed.

Catch BB in one of the intermissions. He said something along the lines that when the leaves were in town they had more fights, arrests, assaults and drunken disorderly than any other team. Said the leaves fans were the worst and most disruptive.

I saw Burke saying that during the intermission. Said Montreal and Ottawa fans didn't do anything like it.

It was the same way when I took two of my daughters to see the Leaves play the Canucks during spring break in 1995. We were seated behind the nets in the lower bowl and when the score got to be 3-1 late in the third period we had a front row seat to a group of unruly Leaves fans starting fights and being escorted out of the Pacific Coliseum.
Top

Catch BB in one of the intermissions. He said something along the lines that when the leaves were in town they had more fights, arrests, assaults and drunken disorderly than any other team. Said the leaves fans were the worst and most disruptive.

Good ole American boy tellin it like it is huh?

Edler was back to awesome Eddy. Great game. Gaudette's game is coming along.
Bo is getting angry at that nasty puck not doing what it's supposed to.
And yes, Pete is getting a wee bit frustrated.

Remember when we use to say what a shitty glove hand Markstrom had? Now it's a puck magnet.
"evolution"
Top

Gaudette looks better each game. His confidence is growing and it shows. 2 assets tonight is huge for this team. To me he has really made Sutter expendable. Not just because he can play 3rd line but because if you keep Sutter you take ice time away from Gaudette. He is still learning and may not yet be as good defensively as Sutter or as good in F/O but that will come. We don't need both Sutter and Beagle. One placeholder is enough, given Gaudette has shown he can hold down the third line. I couldn't say that for the first half of the season but I can now. I think Gaudette with Pearson and Virtanen could be a good third line for us.

Boeser had a strong game tonight. He was actually back checking. He looked faster tonight so maybe he was fatigued. But I liked his game tonight.

Both Bo and Eli looked pissed at times tonight. I like that fire. Pettersson is going to have to learn to play through all the tight checking. Its not going to get easier for him. I think he will but he could be in for a big sophomore jinx next year. He's young.

Goldobin had a good game too. Still some noticeable mistakes but due to injuries and our need for offence Green doesn't have much choice but to play him. And he needs to play. Im liking his game more and more.

Stetcher had a great game and a big hit on Matthews to boot. High risk high reward type of player.

By the time we move our clocks ahead on Sunday we should know if Hughes is on a plane to Vancouver or going to the Frozen Four.
The only HW the Canucks need
Top 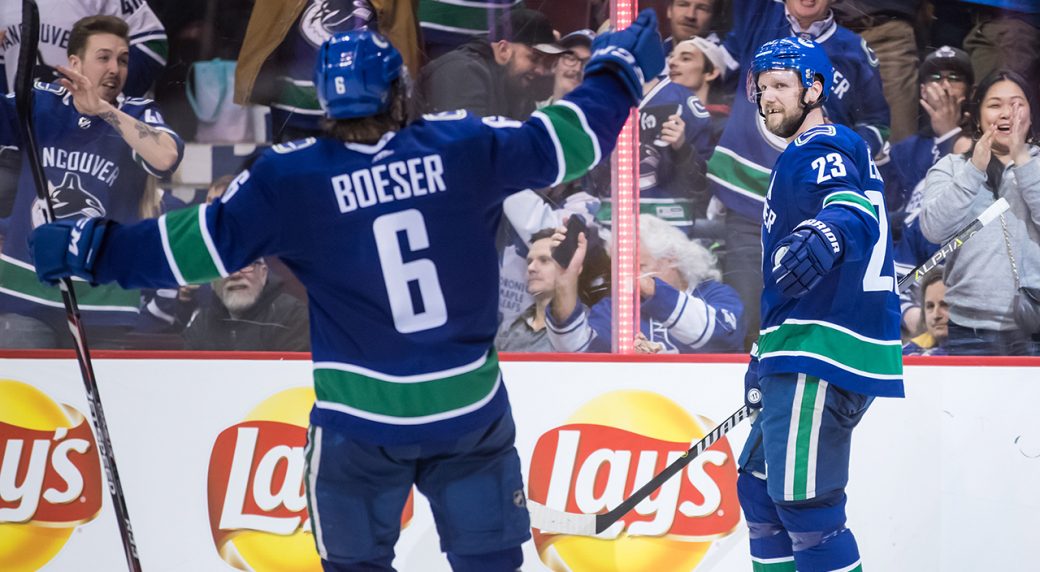 We’d have put that quote even higher but there’s not much room before the first paragraph.

Horvat is from Rodney, Ont., near London. He grew up cheering for the Detroit Red Wings and has spent all of his National Hockey League so far with the Vancouver Canucks. On the West Coast, he hasn’t grown any fonder of the Toronto Maple Leaves.

His sentiment is in perfect harmony with his environment. Out here, the Maple Leaves are about as popular as pipelines, except for the many thousands of Ontario transplants who cheer for them and transform visits by the Leaves to Rogers Arena into the hockey equivalent of West Side Story.
"evolution"
Top

I'm really suprised how shitty Muzzin has become. He used to be a fairly mobile defenseman for a big dude. His game bears a striking resemblance to Gudbransons

The laughs got bent over and power fucked hard on that one.
Witchcraft... Oh, but it IS. A dark and terrible magic...
Top

TG, who has been taking a lot of flack here recently, out coached the cock. True it was a home game with last change, but in a fast paced game, TG got his line matchups all night long.

Horvat line was better than the Tavares line, Pettersson as a one man blanket on Mathews was an interesting watch though my preseason Pettersson falling down/drinking game prediction is beginning. Pettersson needs speed.

The change in the PP personnel has brought movement to the play, if they ever gain the fucking zone.

Now we know why Schenn is rarely an NHL D, he needs a running start. Can Pouliot turn in both directions?

Guadette will bring more offence than Sutter, which drops Bo into the heavy shutdown role with Beagle.

That was a game Jake would have thrived in. The Canucks are missing his speed and hitting on the forecheck.

The cycle along the end boards is slowly creeping back into Vancouver's game.

Saw a honey wearing a leaves jersey so I introduced myself. "hi, my name is two goal lead."
She replied with, "that's an unusual name, why do people call you that?"
"Because the leaves always blow a two goal lead."
Over the Internet, you can pretend to be anyone or anything.

I'm amazed that so many people choose to be complete twats.
Top
Post Reply
138 posts