VANCOUVER -- The National Hockey League announced today a series of rule changes for the 2019-20 season which will include the use of expanded video review and enhanced player safety initiatives, as well as promoting even more offense and flow in the game.

The rule changes were unanimously approved by the League's Board of Governors, NHL General Managers and the Competition Committee over the past week. NHL Hockey Operations will work on the precise Rule Book language over the coming weeks. Following is an overview of the changes:

NEW CATEGORY: In addition to Coach's Challenge for "Off-side" and "Interference on the Goalkeeper", a third category will allow for the Coach's Challenge of goal calls on the ice that follow plays in the Offensive Zone that should have resulted in a play stoppage, but did not.

This change will allow Challenges of plays that may involve pucks that hit the spectator netting, pucks that are high-sticked to a teammate in the offensive zone, pucks that have gone out of play but are subsequently touched in the offensive zone and hand passes that precede without a play stoppage and ultimately conclude in the scoring of a goal. Plays that entail "discretionary stoppages" (e.g. penalty calls) will not be subject to a Coach's Challenge.

Coach's Challenges for these types of plays (and for "Off-Side" Challenges) will only be available if the puck does not come out of the attacking zone between the time of the "missed" infraction and the time the goal is scored.

MAJOR & MATCH PENALTIES: Referees will be required to conduct an on-ice video review for all Major (non-fighting) and Match Penalties they assess on the ice for the purpose of: (a) "confirming" the penalty; or (b) "reducing" the penalty to a two-minute minor penalty. Referees shall not have the option to rescind a called penalty altogether.

The Referees will be provided with all available video to review their own calls but will not otherwise consult with the NHL Situation Room with respect to their review.

DOUBLE MINOR FOR HIGH-STICKING: Referees will have the ability to conduct an on-ice video review to confirm (or not) their original call on the ice, and, in particular, whether the stick causing the apparent injury was actually the stick of the Player being penalized. The Referee's review of all High-Sticking/Double-Minor Penalties will be discretionary and not mandatory and will be conducted without consultation with the NHL Situation Room.

HELMETS: Subject to further consultation with the NHL Players' Association on precise language, a Player on the ice whose helmet comes off during play must (a) exit the playing surface, or (b) retrieve and replace his helmet properly on his head (with or without his chin strap fastened). A Player who is making a play on the puck or who is in position to make an immediate play on the puck at the time his helmet comes off, shall be given a reasonable opportunity to complete the play before either exiting the ice or retrieving and replacing his helmet. Failure to comply with the above will result in a minor penalty being assessed on the offending player. A Player who intentionally removes an opponent's helmet during play shall be assessed a minor penalty for roughing.

FACE-OFFS FOLLOWING AN ICING & TO BEGIN A POWER-PLAY: Following an icing as well as at the beginning of any power-play, the offensive team will have the choice of which end zone dot the face-off will take place.

AWARDED GOAL: If the goal post is deliberately displaced by a goalkeeper during the course of a "breakaway", a goal will be awarded to the non-offending team.

Really happy about no changes when the goalie freezes. That is great. Big improvement.
"evolution"
Top

HHOF Carbonneau and Zubov wow the standard has lowered big time.....good times. Burrows and Bieksa have a chance.

Fans want Luongo’s sweater retired. May as well throw McLean, Gradin and Morrison up there too. Maybe the biter and Chris Higgins. Bryan Glynn????

Wade Brookbank for Ring Of Honour

You make us proud Frank and Gary ..... bush league team in a forest full of beatle kill

How about Laffayette and his post...hang them up in the rafters. That time we almost won...
Witchcraft... Oh, but it IS. A dark and terrible magic...
Top 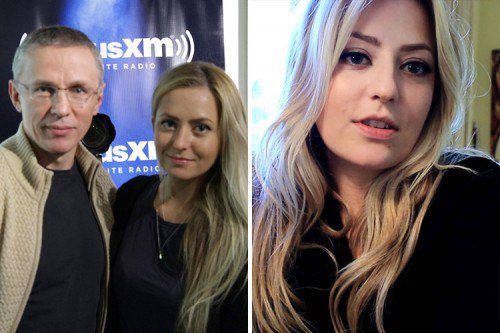 While I am not sure what Igor has to do with NHL buisness, I approve of his daughter and would gladly shake her daddy's hand.
The 'Chain of Command' is the chain I am going to beat you with until you understand I am in charge.
Top

Reminder that tomorrow, the NHLPA has an option to opt out of the current CBA between the NHL and NHLPA

Reminder that tomorrow, the NHLPA has an option to opt out of the current CBA between the NHL and NHLPA

If they choose to do so, the CBA will expire at midnight on September 15, 2020

They have until Monday cuz "next business day". 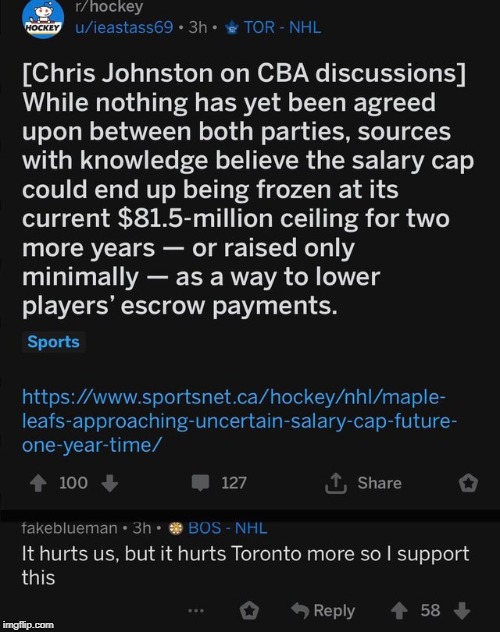 I agree. The players should keep more money in their pockets.

Try to focus on THIS year...
Top

"If the NHLPA announces today it is waiving its right to “re-open” the CBA, we are guaranteed 3 years of labor peace. It’s all spelled out in the current CBA — the CBA would NOT expire on Sept. 15, 2020, and would, in fact, be extended for two more seasons, until Sept. 15, 2022.

Of course, it’s never quite as simple as it looks. For the past number of days/weeks/months, the NHL and NHLPA have been negotiating potential amendments to existing CBA and discussing framework/details of a CBA extension that could give us labor peace to 2025, maybe even 2026.

The two sides haven’t reached agreement on current CBA amendments or a new CBA extension, but by all accounts they have made some notable progress. But today is the deadline for the players to make their decision on the re-opener, so a decision is coming.

This is the calculated risk of the players re-opening the CBA — the threat of the current amicable/progressive negotiations perhaps going south to a door that is wide open to a potential lockout.

Now, this threat must be weighed against risks associated with NOT re-opening the CBA today. As stated earlier, as soon as NHLPA announces NO re-opener, the current CBA is extended until Sept. 15, 2022. The players want changes to this CBA; that’s what they’ve been negotiating.

The NHL has pledged to continue good-faith negotiations.
And for the first time, perhaps ever with a potentially expiring CBA, the NHL appears to be pre-disposed to NOT want a lockout this time, what with potential U.S. national TV deal and new gambling revenues on the horizon."


They should throw out the recapture penalty for whoever got dinged with that if those contracts were signed before the current CBA deal was done. Maybe some waiver wire loopholes so vets can get sent down and recalled easier without getting claimed. Some cap trades, idk what else.

Mutual termination of contracts should be explored. There must be countless applicable situations that wouldn't be considered circumvention of the salary cap. Luongo, Lucic, Belesky, Eriksson...
Witchcraft... Oh, but it IS. A dark and terrible magic...
Top

Nice try!!!! But the PA will never approve that. I like it though...
"evolution"
Top

The NHLPA announced today that the Executive Board has declined to reopen the CBA with the NHL following the 2019-20 season. The current CBA remains in effect through the 2021-22 season. The NHLPA advised the League of its decision earlier today.

"While players have concerns with the current CBA, we agree with the league that working together to address those concerns is the preferred course of action instead of terminating the agreement following the season.

We have been having discussions with the league about an extension of the CBA and expect that those talks will continue."